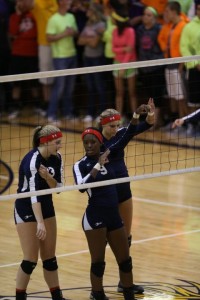 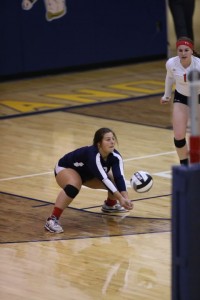 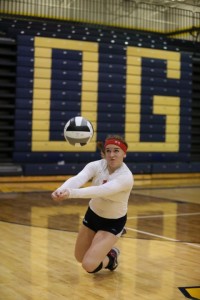 Possibly the biggest challenge for the fifth-seeded T-Birds would be finding a way to keep the ball away from McComb’s tall front line.

However, the Panthers’ solid passing and strong play near the net eventually proved to be too much for the T-Birds, as McComb pulled away in straight sets — 25-20, 25-14 and 25-12, en route to winning the district championship at Robert J. Hermiller Gymnasium.

With the win, McComb (25-1) advances to the Elida regional tournament Nov. 5 when it faces Ayersville. LCC ends its season 18-8.

“If you hit anything easy to them, they’re pounding it straight down,” Horstman said. “And even on the hard shots we were sending, they were making some really nice plays and putting them where they could just swing away.

“We had a pretty decent game plan. … We were trying to hit the corners and some spots. We were able to do that at times. But, I just think the consistency of doing that tonight wasn’t that good. But, McComb’s a really good team.”

In the first set, LCC got out to a quick 4-1 lead, thanks to some aggressive play by Ava Nieman (five kills) and Ella Delamotte (three kills). However, the Panthers came roaring back with several kills by Huffman to gain control. Huffmanknocked down 10 shots in the first set.

In the second set, McComb took control from the start and led throughout.

In the third set, the score was knotted four times before McComb was able to take control for good.

“I told them that we just have to stay aggressive,” Horstman said about the third set. “We have to stay loud and just keep going after everything. Keep swinging away and good things can happen. But, credit McComb. … They made some fine plays.”

“I was impressed with the job he (Horstman) did in getting them ready,” McComb coach Dave Reinhart said. “(In) that first game, they pushed us to the limit. Then, the second and third games, they made some mistakes.”

After the loss, Horstman reflected on the season and praised his team on its resiliency.

“We probably had five or six matches this year, that going into them they were coin-flip games. … We could have lost, or we could have won,” Horstman said. “We could easily be 12-12, instead of 18-7. So, our kids did a very nice job of winning a lot of those tight games — games we lost last year. It could have been an average season, but we really pulled through and won three games in a row to get to the finals. So, we’re proud of our kids.”