Walton, who is headed to Northern Kentucky University, is averaging 18.5 points and 9 rebounds per game. He sharedthe award with Portsmouth’s Ky’re Allison.

Joining 6-foot-5 Walton on the first team is 6-1 LCC senior teammate Tre Cobbs, who is averaging 19.7 points per contest. Both are among the top four career scorers in school history along with Joe Fisher and Aaron Hutchins.

LCC, ranked No. 1 in D-III, will play Roger Bacon at 2 p.m. Thursday in the state semifinals at Value City Arena in Columbus.

COLUMBUS — The 2015-16 Associated Press Division II and III All-Ohio boys basketball teams, based on the recommendations of a media panel, with school, height,class and scoring average during regular season: 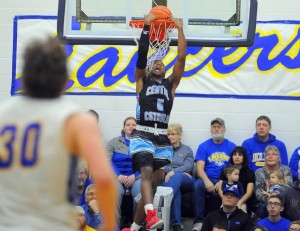